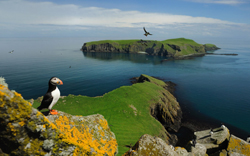 The Blasket Islands have a rich variety of birds, with at least seventeen different species of sea bird breeding on the islands. Some of these colonies are of considerable national and international importance (Manx Shearwaters and Storm petrels).

Immediately on arrival to the Great Blasket Island you will notice the abundance of Wheatears, Stonechats, Pipits, Swallows, Skylarks, Wrens, Chough and, of course, the old reliable Robin.

Visitors cannot help but be impressed by the diverse range of breeding sea birds such as Puffins, 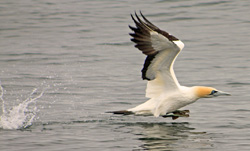 During the 1980's geese numbers dwindled on the islands until there were none to be seen on their wintering grounds on Beiginis Island. Amazingly last Autumn, both Barnacle Geese and Pink footed Geese were once again spotted on the old haunt. Hopefully this is a good sign for the future. 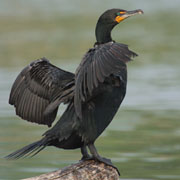 After an extended period of bad weather (particularly in a Westerly wind) rare birds can be blown off course and arrive for a well earned rest on the Blasket Islands.

These rarities include Grosbeak, Rosefinch, Myrtle Warbler, Wryneck, Buzzard, Black Redstart and even the elusive Corncrake. All in all, a birders paradise.