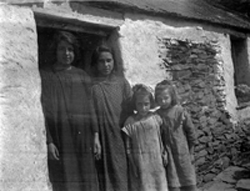 There is no doubt that the Blasket Islanders led a life strewn with hardship, danger, isolation and sacrifice. It was a constant battle for life on what was little more than a wind swept rock. These hardy people eked a life through fishing supplemented with a ridge of potatoes, a patch of oats and (if lucky enough) a cow.

All families kept a few grazing sheep on the steep hills of the Island, which was considered commonage, and during the summer months turf was cut and dried in preparation of the harsh winter. 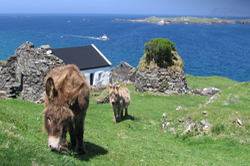 One of the most important inhabitants of the Islands was the donkey. It played a very intricate part in Island life, drawing turf home from the hill, and kelp from the beach but strangely enough it was never harnessed for ploughing the land.

From the early 1920's until the late 1930's the Great Blasket Island produced writers of such talent and calibre that today, their works are considered classics. 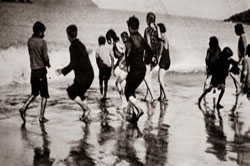 No other community of similar size has produced such a wealth of rich literature. Peig Sayers, Muiris O'Sulibhan and Tomas O'Crithin wrote in their native language, of living on the very edge of the world, surrounded by water, forgotten by all.